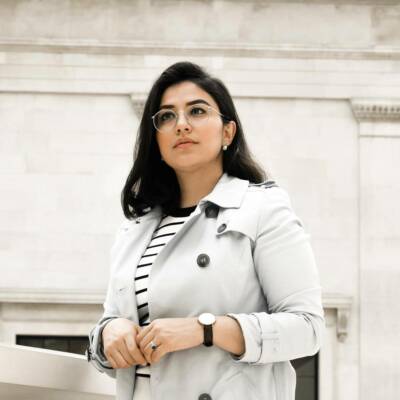 Shabnam Nasimi is the Policy Advisor to the UK Minister of Afghan Resettlement, working with Minister Victoria Atkins to deliver ‘Operation Warm Welcome’ by ensuring those fleeing Afghanistan are able to make a success of a new life in the UK.

She is a British Afghan social and political activist, commentator and writer. She is the founder of the Conservative Friends of Afghanistan, a political, business and diplomatic forum aimed at building a more meaningful and stronger relationship between the UK and Afghanistan. She also currently works in political communication and public affairs.

She also led the secretariat for the Afghanistan All Party Parliamentary Group, which provides a forum to discuss all aspects of Afghanistan’s development, security and humanitarian situation to improve HMG’s policies toward the country.

Shabnam arrived in the UK at the age of eight with her family, fleeing the Taliban regime in Afghanistan.  She is best known as one of the leading British Afghan Conservative campaigners, having immersed herself in British politics.

Her professional experience has included working in Afghanistan to deliver a UKAid funded project of getting more girls into education, working for counter-terrorism within the Home Office and advocating for the rights of refugees and asylum seekers in the UK and in Westminster alongside an MP. She also leads the Afghan Witness project with the Center for Information Resilience, which monitors the human rights situation in Afghanistan.

She is also a leading commentator in international media, appearing regularly on news and current affairs programmes to discuss Afghanistan, the rights of girls and women, international development and other related issues. She has been instrumental in raising awareness of the humanitarian and development situation in Afghanistan and conflict zones.

She is an expert on Afghanistan and has advised FCDO, the EU Special Envoy Afghanistan and other  private companies, government agencies and NGOs – and is an ardent campaigner for women’s rights.

Shabnam’s writing has been featured widely in the British press, including The Times, the Spectator, the Telegraph, Foreign Policy and PoliticsHome, among others. She is regularly invited to speak at national and international forums.