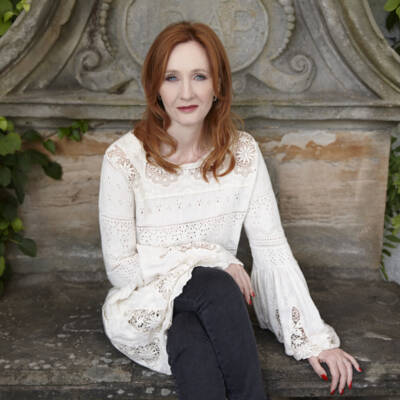 J.K. Rowling is best-known as the author of the bestselling Harry Potter series of seven books, published between 1997 and 2007.  The enduringly popular adventures of Harry, Ron and Hermione have gone on to sell over 500 million copies worldwide, be translated into over 80 languages, and made into eight blockbuster films.

Alongside the Harry Potter series, J.K. Rowling also wrote three short companion volumes for charity: Quidditch Through the Ages and Fantastic Beasts and Where to Find Them in aid of Comic Relief; and The Tales of Beedle the Bard in aid of her non-profit children’s organisation Lumos.

In 2012, J.K. Rowling’s digital company Pottermore was launched, which became Wizarding World Digital in 2019. Pottermore Publishing continues to be the global digital publisher of Harry Potter, Fantastic Beasts and the Wizarding World.

In 2016, J.K. Rowling collaborated with playwright Jack Thorne and director John Tiffany to continue Harry’s story in a stage play, Harry Potter and the Cursed Child, which opened in London and is now playing in the USA and Australia.

In the same year, she made her debut as a screenwriter with the film Fantastic Beasts and Where to Find Them.  Inspired by the original companion volume, it was the first in a series of new adventures featuring wizarding world magizoologist Newt Scamander.  The second film, Fantastic Beasts: The Crimes of Grindelwald, was released in 2018.

Her fairy tale for younger children, The Ickabog, was serialised for free online for children during the Covid-19 pandemic in the summer of 2020 and is now published as a book illustrated by children, with her royalties going to charities supporting vulnerable groups affected by the pandemic.

October 2021 sees the publication of her latest children’s novel The Christmas Pig, a standalone adventure story about a boy’s love for his most treasured thing, and how far he will go to find it.

J.K. Rowling also writes novels for adults. The Casual Vacancy was published in 2012 and adapted for television by the BBC in 2015.  Under the pseudonym Robert Galbraith, she is also the author of the highly acclaimed ‘Strike’ crime series, featuring private detective Cormoran Strike and his assistant Robin Ellacott. The first of these, The Cuckoo’s Calling, was published to critical acclaim in 2013, at first without its author’s true identity being known.  The Silkworm followed in 2014, Career of Evil in 2015 and Lethal White in 2018.  All four have been adapted for television by the BBC and HBO.  The fifth book, Troubled Blood, is now out and was also an instant bestseller.

J.K. Rowling’s 2008 Harvard commencement speech was published in 2015 as an illustrated book, Very Good Lives: The Fringe Benefits of Failure and the Importance of Imagination and sold in aid of Lumos and university–wide financial aid at Harvard.

As well as receiving an OBE and Companion of Honour for services to children’s literature,

J.K. Rowling supports a number of causes through her charitable trust, Volant. She is also the founder and president of Lumos, an international children’s charity fighting for every child’s right to a family by transforming care systems around the world.